Painted up the Forge World Enforcer's Cyber Mastiff this weekend, never painted non human skin before, was a challenge to get it looking real. Re-did it twice before I was happy. Some more contrasts to put in maybe but for now I am happy.


Over the last week or so, I have been thinking about Games Day and Golden Daemon UK. This will be my first real shot at entering something that isn't crap and an excuse to get into the hall an hour early, and as always, planning is key. While I can't reveal the full lineup of entries just yet, I am planning to enter the WH Monster and LOTR Single Mini comps, as well as the 40k Squads, 40k Vehicle, and 40k Monster Category.

For the monster category, I have decided on entering my converted Destroyer Lord. I have never been much of a fan of the existing Destroyer Lord model, and with the new fluff depicting them as outcast maniacs, I am now even less so. After seeing the outcast Megatron in the latest Transformers movie, I liked the idea of a cloak/headscarf. As such, I set about making my own version. Using an old Destroyer body I had lying around (in hindsight a mistake, I had no idea how to put things together properly 7+ years ago) and the new Cairn Wraith plastic from the Vampire Counts range as a basis, I went to work, and here are the results-

The over arching spine is a big theme present on the current Destroyer Lord, and one that I wanted to replicate, so after heating and bending a spine from the Triarch Pretorian box set, I set to greenstuffing it, trying to give the impression that the spine has ripped through the cloak, and is now visible from the top.

With that done, I then set about adding the shredded cloak element around the bottom, and midriff, sculpting some tattered sleeves, then added some cables underneath and into the torso to reinforce the effect that he is an outcast, and has to patch himself up without access to the main tomb complex.

This is my first effort and sculpting anything other than marine legs and arms, so pretty pleased. Will show some updates of him being painted soon enough.

Next up, is my Contemptor for my White Scorpions army. With the investment of an airbrush, painting purple has never been easier, and after nearly a year and a half languishing unfinished on my desk, he is (slowly) nearing completion. Tring out P3 paints for the first time with this guy, must say that I am loving them, quite a difference that GW paints in both feel and control. Dead easy to thin for going through an airbrush too.

Looking forward to doing some freehand on the banner too, love telling a story with my miniatures and this one will be no different.

Lastly, is my contribution towards the Black Crusade 2012, an Alpha Legion Squad with accompanying Rhino. Was aiming for the blue-green pearlescent effect from the artwork in the third edition codex here: Lenses and Lights still need to be painted, but pretty pleased with what has been done so far. The squad is in various states of assembly, but will post another update here and on my own blog when they are done.

The tank was weathered using washes and pigments from Secret Weapon Miniatures, and some enamel washes from AK-Interactive. I'll have a go at reviewing products from both these companies in the near future, as they will be getting liberal use on my GD entries.

Thanks for reading folks!!

Guys! Click here to find out how you can help this amazing charity, and from now until the 24th of December each dollar you donate will earn you double the entries, so a $20 Dollar entry will earn you 40 entries into the draw!! So get them dollars in quick!
Posted by AridMonk at 5:39 pm No comments:

Tournaments, Necrons and Gauss, oh my!

So, recently I have decided to enter into a 500pt doubles tournament at Warhammer world. Its a local GW store based thing, where 2-3 coaches worth of guys travel down from where I'm based in Scotland and we play a few rounds of 40k with our friends at the best warhammering place in the world.

I'm having a lot of trouble with my White Scorpions - Basically I can't get the damn things to look the way I want them to when I am building and converting them, and when I do I cant decide on a proper paint recipe. So, rather than struggle to get 500pts done in time, or do 500pts I am not happy with, I decided to start afresh and do some of those shiny shiny new Necrons.

Which comes to roughly 500pts. Fairly balanced list, plenty of delicious Tesla, and not too many models for me to paint in time.

So, the painting part, I've spent the last week or so messing around with the Plastic overlord you get in the Command Barge box, and here are the results: 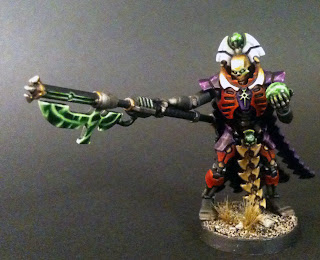 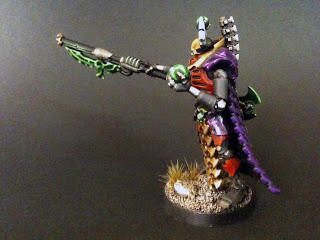 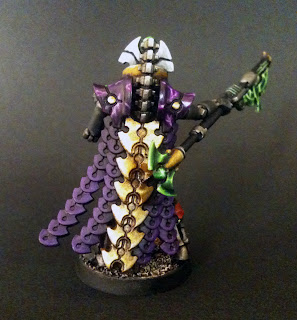 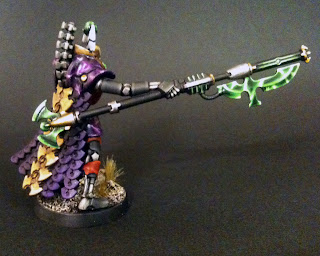 Fairly pleased with the green glowy bits on his war-scythe and orbs, but still need to work on the crystal effect on his shoulder plates, that hasn't come through the way I wanted it to. Next up is the Command Barge, so will update that on here as it comes.

Oh, in case you missed it, I put up a magnetisation tutorial on MWC the other day for the Command/Annihilation Barge, so lemme know what you think there as well. 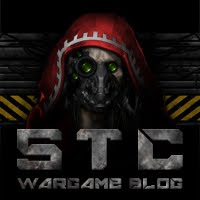